It started snowing not long after I woke up on Wednesday and continued all afternoon, turning to sleet toward evening, though before that, there were thick, beautiful flakes that stuck to everything. After chatting with friends, I took a walk to see whether the apricot blossoms and winter jasmine were still blooming, which they were, plus a neighbor's camellia. We put seed in the bird feeder and had cardinals, titmice, junkos, sparrows, and the inevitable squirrels visiting all day. 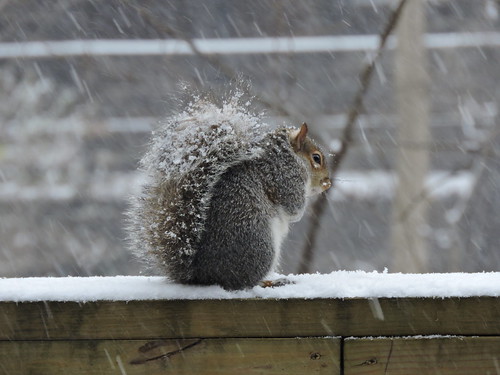 After dinner we watched the season finale of The Masked Singer, where for once the best singer won (and a woman, though I actually think the runner-up was probably the most talented performer). Then we watched the "Delivery: All-Star Hanukkah" episode of Guy's Grocery Games, in which my cousin's husband's brother, a well-known L.A. chef, was one of the contestants. He cooked and lit the menorah with them at their house, so that was fun seeing it on TV!
Collapse