This is probably the quietest Christmas week we've ever spent, even including the year I was pregnant over it. Adam worked all day; Paul baked cookies, though we're not going to see his parents on Christmas to share them because there's snow forecast in their area; I caught up on a bunch of projects and chores. Everyone had tomato soup and sandwiches together for lunch, then Paul and I went to Cabin John Park to take a walk and saw a fox crossing the trail and running into the woods.

We had Lebanese Taverna delivered for dinner (Adam asked for it, but it's one of my favorites), then we watched the second half of The Amazing Spider-Man 2, which goes from merely not great to pretty terrible very quickly. Afterward, Adam told us we needed to watch Harrison Bergeron, having discovered that we had not seen it, and although it has many of the pitfalls of dystopian fiction, it also has some enjoyable social parody. Seeing the fox today reminded me of the one at the canal last weekend: 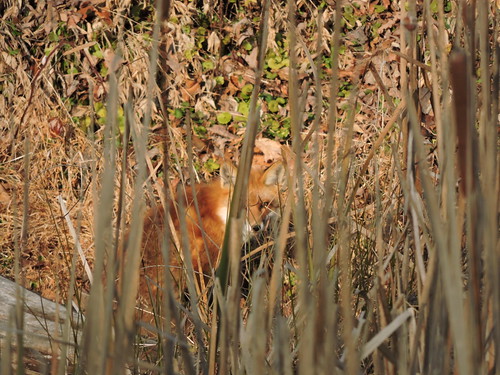