We had another quiet day around here that started very early for me because I had a virtual doctor appointment (went fine, but apparently her examination revealed that I am not over 75, so I can't get the vaccine in the next phase in my state). I got a couple of things done during the rainy morning, we all took a walk together in the afternoon, and it was a two-bunny day despite the rain. 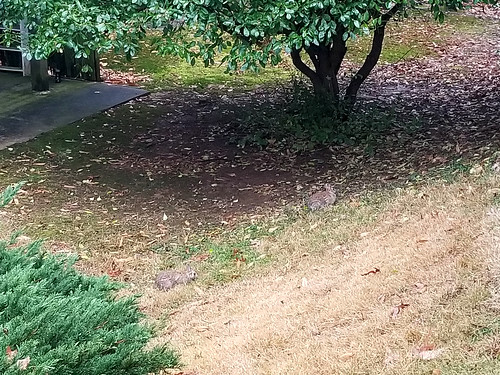 We ordered Ethopian food from Sheba for dinner, which was delicious, then I watched Voyager's "Learning Curve" with my fan group (still mediocre) and talked about the topics that would stress me out all night: the Georgia election, the lack of justice for Jacob Blake, the impending insanity in DC tomorrow, the South African COVID variant that may be vaccine-resistant.

So with only a cursory glance at the Heisman Trophy news, the Grammy Awards cancellation news, the Tanya Roberts news, and the Kardashian-West divorce news, we watched the first half of Avatar, which remains visually one of the most enjoyable movies I've ever seen. The special effects hold up superbly and the world-building is very satisfying despite the shallow imperialism.
Collapse