We woke to more snow, though it stayed warm enough that it only collected on the cars and grass and had melted on the roads before noon. So we had a quiet morning -- I watched the first two episodes of WandaVision with a British friend, then we watched part of the Puppy Bowl before going to take a walk in Cabin John Park so we got at least a bit of exercise that didn't involve brushing snow off our vehicles.

I chatted on Zoom with friends for an hour or so before going to my parents for pizza and the Super Bowl. I was rooting for the Chiefs because I can't root for Tom Brady, but after the 700th defensive penalty on Kansas City, I stopped caring. Both my father and father-in-law were rooting for the Buccaneers, so at least they're happy. It's supposed to be bitterly cold overnight, so my goal for Monday is not to slip on ice. 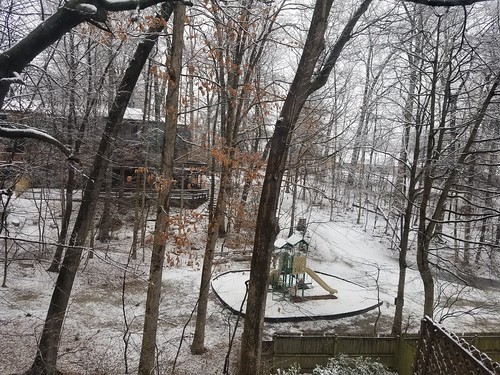