My Tuesday, like my Monday, was okay for me personally but difficult for several people I talk to regularly, so I am still Really Ready For This All To End Globally. I saw my parents briefly -- they had their second shots this weekend, didn't feel great for a couple of days, but were out enjoying the lovely weather and brought us belated Valentine's Day presents. We, too, took a long walk, and though the snow is still slippery on the woods paths, it is increasingly melting everywhere in the neighborhood.

I watched Voyager's "Twisted" with my regular group, and though it was about as bad as I remembered, it's always fun to watch with them and we talk about theater and family stuff for so long that I forgot Superman and Lois was on and will have to catch it on demand tomorrow. We watched a couple more Dickinson episodes instead, which the whole second season is far too much about the boys, bleh, and an episode of Chopped, which delightfully had an ice cream disaster. Cardinals at Great Falls: 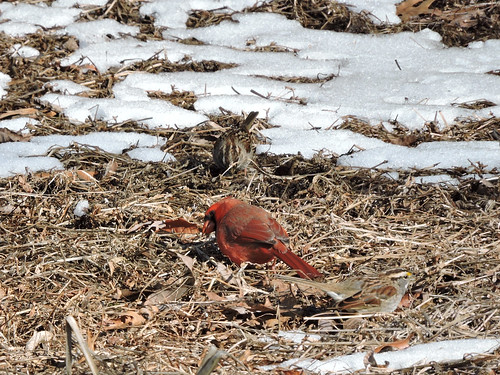