The weather wasn't quite as gorgeous on Thursday as on Wednesday, yet there were more crocuses in bloom in the afternoon when we went to walk in the park again before the dog-walkers trample the early flowers, and oh do I sound cranky again? That's because I spent a huge amount of time today dealing with the fact that an Etsy seller in the Ukraine stole and printed my Barbie Tarot images and is selling the decks for $50 on Etsy, and Etsy will not do a thing about it. My choices are to take down the images -- which have been on my web site for 15 years, so I'm sure other people have downloaded them as well and I feel like are more likely to try to sell them if I can't point to a web site proving that I designed them -- or to try to get Mattel involved since they own the Barbie trademark, but Mattel will probably insist that I had no right to make the cards in the first place and I'm not getting lawyers involved to argue fair use over something from which I never intended for myself or anyone else to profit.

Anyway, as I said, it was a lovely day out, and in addition to the crocuses on the hill and snowdrops by the woods, there were a couple of little yellow flowers and the first daffodil of the season is almost open. I did have a nice Purim celebration in the evening -- Jewish Halloween has always been my favorite holiday, and even without a carnival at Hebrew school, there are posts about Esther/Ishtar and

apaulled made vegan brisket for dinner and mini hamantaschen for dessert, some of which we brought to our neighbors who keep bringing us awesome Moroccan food. We thought about watching For Your Consideration because the fake movie being made in the film is Home For Purim, but we couldn't find our DVD anywhere (Best in Show either, grrr) so instead we watched Tenet on demand. It felt like Nolan took ideas he had from Memento and Inception but didn't do much work on the characters. Debicki plays her character from The Night Manager, and Branagh's character is very over the top. Really glad I didn't risk my life to see it in a theater! 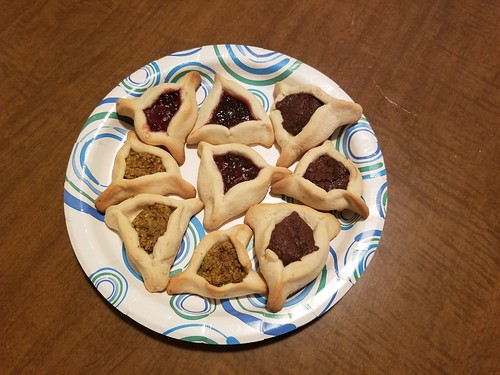