We had spectacular weather on Wednesday, nearly 60 degrees and not a cloud in the sky. I did a bunch of chores in the morning so I could have my Wednesday lunch Zoom call with my high school friends, though one was busy and couldn't make it. Afterward I had a late lunch (Mike's Mighty Good vegetarian craft ramen is as good as reputed) and

apaulled and I went to Cabin John Park to enjoy the weather and see the crocuses at peak. 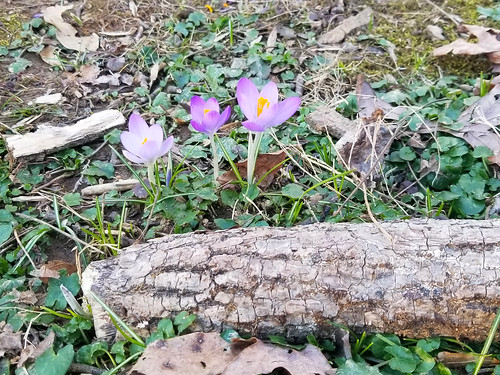 Since we're between The Masked Dancer and The Masked Singer, we spent the evening catching up on Zoey's Extraordinary Playlist, which still has a lead actress I really like and one supporting actress (since the other apparently left after the season premiere), but is still way too obsessed with boys and WAY WAY too obsessed with Skylar Astin's Max, who is so unappealing that I'm now firmly Team Josh in my Crazy Ex-Girlfriend rewatch!
Collapse