Tuesday was my mother's birthday and nearly 70 degrees, so I had flowers and cake, and my Voyager group met in the evening with the addition of the awesome Meredith, my friend for decades (the episode was the terrible horrible no good very bad "Persistence of Vision" which is just as terrible horrible no good very bad as ever, but less painful because I no longer care!). All of these things were nice temporary distractions from the next 525,600 minutes of the pandemic, which have I mentioned I am really over?

In other news, Daniel bought his first car today -- photos below, along with Effie refusing to let me out of bed, my mother's birthday cake and brownies made by her friends, and me and Cinnamon watching Superman and Lois together (better than last week's, Lois got to do interesting work while Clark was more messing up domestic matters). Plus I almost started an argument in my goddess group accidentally about J.K. Rowling, but people deserve to be reminded the royals aren't the only British bigots. 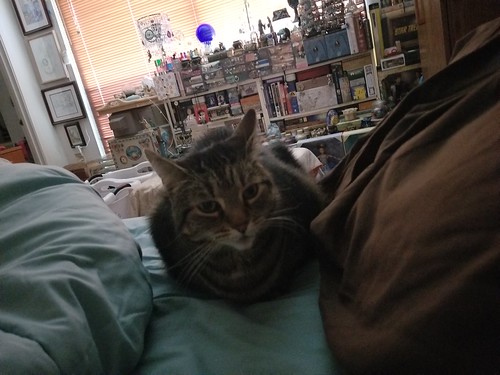