Contrary to earlier weather reports, it was lovely out on Friday, and I went for a walk in the neighborhood before we went for a walk along the canal, where we saw lots of turtles, but we are now in the 4000th hour of Zach Snyder's Justice League, which has a couple of lovely moments not in Whedon's and replaced an atrocious scene with Wonder Woman with several better ones, but OMG IS IT LONG and DID I MENTION IT'S TOO LONG? Makes the gratuitous battle scenes in Infinity War seem restrained. I probably shouldn't have watched it right after The Falcon and the Winter Soldier, which (apart from not having Sharon Carter yet) is both excellent and really enjoyable. Some Brookside daffodils: 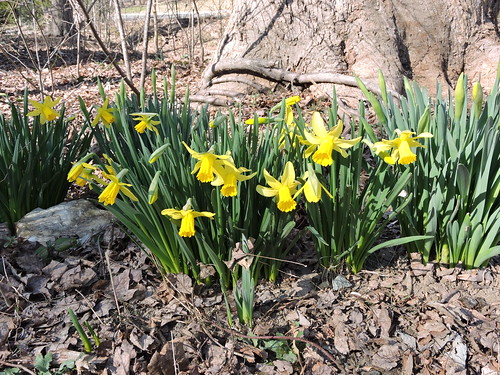