My Monday was mostly about daffodils and basketball, the former because we had spectacular weather and they're blooming everywhere now, the latter because the Terrapins men and women's teams played -- the women in the afternoon, when they scored more than double what Mount St. Mary's did, and the men on prime time, where the Crimson Tide rolled over them. I took photos of bees in my front yard and of flowers all around the neighborhood.

We ran late for dinner because I was sorting ancient papers to scan -- first old medical records (I don't still need pregnancy update reports, do I?), then ancient fannish stuff, where I found the script for the version of Dallas's "Who Shot J.R.?" that I wrote and performed with friends in eighth grade French class, something I've been looking for for years! Here are some of the sheep and their babies whom we met at Frying Pan Farm Park last weekend: 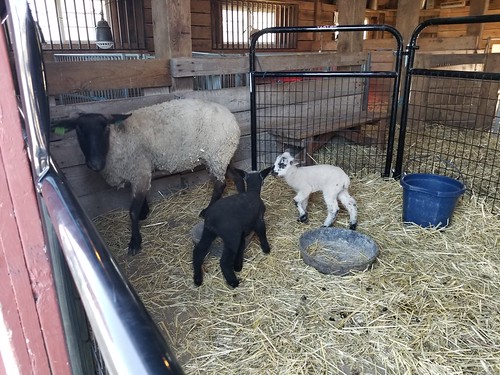