Thursday morning was still damp, but the weather got drier and warmer as the day progressed. I don't have a lot that's exiting to report -- got some work and some laundry done, did a Pokemon raid, chatted with a neighbor, took a walk to see the daffodils and emerging hyacinths. We watched bad Georgia voting news and Biden's press conference, and had basketball on the TV on and off during the afternoon too.

I'm sad about Jessica Walter, too sad for AD reruns. Kay recommended yesterday that we watch the BBC's Ghosts, so we did that after dinner, and it's hilarious -- it's about a woman who inherits a British mansion from a distant relative, then winds up able to see the ghosts of all the previous inhabitants. Here are some photos of the largest group of friends we've seen in the woods this spring: 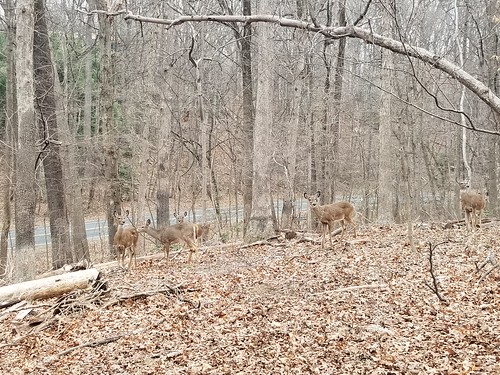