Good Friday started with chilly temperatures and had a forecast below freezing overnight, so we decided early in the day that after work, laundry, and all such exciting things, we would take a walk in nearby neighborhoods to see the remaining cherry blossoms in case they froze before the weekend. In the meantime we watched the latest awful things happening at the Capitol, then the delayed Orioles season opener, which they won against the Red Sox, so that was nice. And then we drove over to these lovely tree-lined streets, which still have lots of daffodils, forsythia, and Lenten roses, plus some pretty outdoor art: 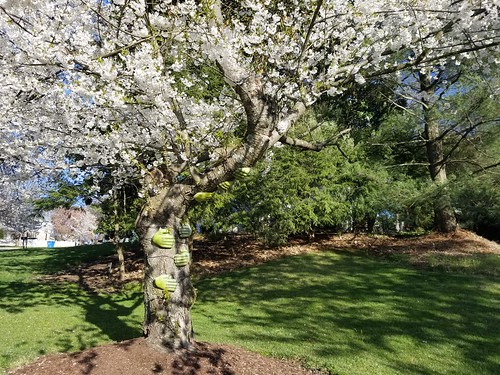 In between the women's NCAA basketball semifinal games, in which I was sorry Dawn Staley's Gamecocks did not win but I'm delighted the coaches of both teams in the final will be women, we watched The Falcon and the Winter Soldier. Minor spoilers: Sam has all the best lines ("I can't run in these heels!" "They [pardoned] the bionic staring machine and he's killed almost everybody he's met!"), the women on this show are without exception awesome (including the ostensible villain, whom they have gone out of the way to humanize), and Sam is allowed to kill [the one they should have guarded better] for the drink with the snake!
Collapse