Thursday was a gorgeous day, lots of flowers blooming, lots of birds singing, and lots of squirrels chasing each other on the deck. So we got our boring stuff done early, then went to take a walk along the canal in the late afternoon to see the bluebells again before Friday rain changes the landscape. The whole hillside between the canal and river is a sea of blue, as is Swainson Island, plus there were over a dozen frogs sunning in the canal, several species of waterfowl in the river, and the muskrat was back! 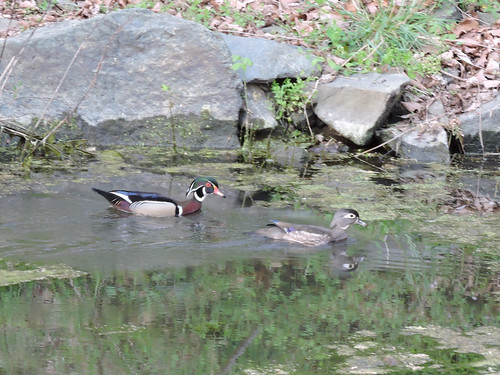 I did a remote Pokemon raid with son's girlfriend before dinner (sausage and shells), and I had a Zoom call in the evening with fannish friends, though I could not contribute to the BTS discussion since I still can't even tell the Backstreet Boys apart, let alone newer boy bands! I had to leave early because my in-laws called -- they're happy it's spring -- and after talking to them, we watched the first episode of the new Kung Fu, which has great women, so I enjoyed it a lot and will definitely watch next week.
Collapse