Storms were forecast for Sunday, but in between some rain in the morning and a big evening thunderstorm that distressed the cats, it was a gorgeous mid-70s day. It was also a Pokemon Go Community Day, so I spent a couple of hours catching and evolving Snivy, then we had lunch and went out. The Montgomery Potters, who usually have a show at the Garrett Park Town Hall, were instead displaying their work in locations around the county including the covered driveway of a nearby friend, so we went to see the pottery. Then we went to Cabin John Park to see the mini train running while we walked along the stream. 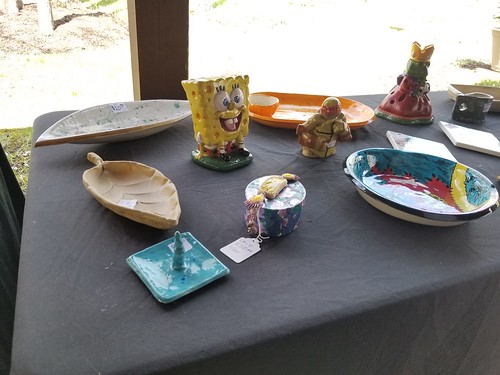 We Skyped my kids and my parents, who later got us Grand Fusion for dinner so I got to have Thai basil tofu (and also saw the terrible end of the Nats game, equaled only by the terrible end of the Orioles game). When we got home we watched Zoey's Extraordinary Playlist -- better, for a change, not about boys for almost 10 minutes! -- and the first episode of The Nevers (yes, I know, but he left the show, and there are a lot of awesome women in the cast, and I like the steampunk London setting and visuals). Now it's John Oliver on Last Week Tonight warning me how much old age will suck since younger son says he's putting me in a home.
Collapse