I did a bunch of necessary cleanup in the backyard on Tuesday, in gorgeous weather so it was nice to be outdoors, but I got a splinter in my thumb and it feels like a paper cut now. We had two big plastic playhouse-type toys from when our kids were very young that I was going to put on Freecycle, but I dragged them into the common area with the play equipment behind the house and neighborhood kids were jumping and playing all over them by afternoon, so I'm calling that a success. We also had an expedition in the morning so Paul could take a drug test now that he's going to be working directly for the agency where he's been contracting for several years (I did a Pokemon raid while he was peeing in a cup).

We went to walk in the park in the afternoon, partly to see the redbuds and partly because I discovered during the raid that new Pokemon had arrived for Rivals' Week and I knew there would be more in the park with its multiple gyms than in my neighborhood with its one. We had leftover Thai food for dinner before my Voyager group watched "Prototype" -- not one of the greats, but a Torres episode is always good -- then we watched Supergirl, which was okay, and Thunder Force on Netflix, which is moderately silly and predictable but there's nothing I don't love about Octavia Spencer and McCarthy and Bateman are very enjoyable. Brookside Gardens has an art exhibit remembering the residents of Montgomery County lost to COVID: 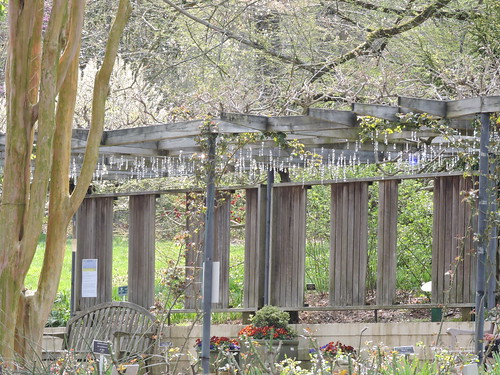