Thursday was a ridiculously nice day, so much so that I snuck out at lunchtime to do a Pokemon raid and went for a walk at Locust Grove, which has a carpet of bluebells near the nature center and several frogs in the tadpole pond and the new waterfall fountain out front. It was so pretty that I convinced Paul to go take a walk there in the late afternoon, too, to listen to the spring peepers and see the dogwood and redbuds along the woods path. 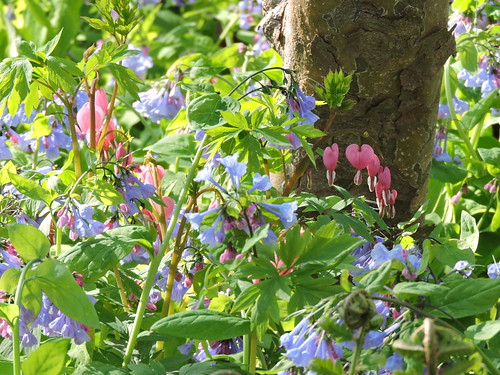 I gave a neighbor's son a bunch of big plastic toys that had to be hosed down first, including an easel, so I spent lots of time outside, which was lovely. Plus I chatted with friends after dinner (huzzah for vegan fish sticks) while we had the Nationals-Diamondbacks game on mute, which was a good thing because after a couple of good early innings, it was a big disaster for the Nats. And Colbert's a rerun, so I'm watching the end of this phase of the MCU and already miss it!
Collapse