Saturday was a gorgeous day, so after lunch we went on the Countryside Artisans spring tour, which is mostly outdoors and socially distanced -- we started at Breezy Hill Farm, where I had my fingers nibbled by a baby goat and got nuzzled by an alpaca, then we went to Heron's Meadow Farm, where we bought tea, then Something Crafty studio, which has goats, chickens, and peafowl as well as crafts, then Art of Fire studio, which in addition to glassblowing has several cats wandering around, and finally Dancing Leaf Farm and Sugarloaf Studio, the former of which has the sheep that produce the wool for the yarn and the latter has beautiful art of the backyard views of Sugarloaf Mountain. These are just us enjoying the animals: 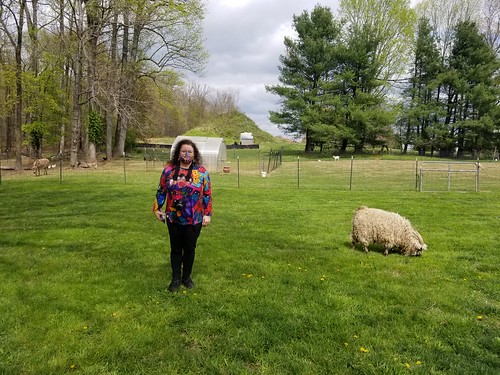 We came home briefly to feed the cats, then had dinner with my parents, who had food delivered from Clyde's, which was great. Then we came home and watched Godzilla: King of the Monsters, interrupted by a call with our kids, one of whom had been out hiking to Twin Falls and the other of whom had just bought a paddleboard and was testing it on the river. Once again I felt like there was not enough Godzilla in a movie with Godzilla's name in the title, but hey, the more monsters, the merrier, I guess!
Collapse