We spent Sunday in Baltimore, where the weather was gorgeous and, masks and social distancing aside, it almost felt like life before the plague. We went to Druid Hill Park to see the crab apples and sculptures, then to the Rawlings Conservatory to see the tulips planted all around it -- I'm pretty sure it's open inside, but until we're both fully vaccinated, a humid greenhouse does not seem like a good option. Then we went to the Maryland Zoo, which had a lot of people (timed tickets are required) but didn't feel crowded except in spots where everyone wanted the best view of the new resident rhinos, the baby prairie dogs, and around the lunch area, which we avoided. 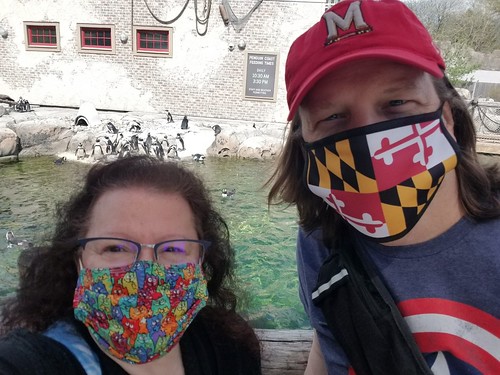 Obviously those are all selfies, will post proper animal and flower pictures during the week! We had "ham" and cheese pie for dinner, then we watched The Nevers, which is pretty great (and yes I know I'm not supposed to say that or possibly even to watch it because of Joss Whedon, but he left the production a couple of episodes in, and there are many awesome women on and writing the show). Then we watched the new Kate Winslet HBO show, Mare of Easttown, which may end up being either too violent or too depressing to stick with but also has a lot of great actresses involved, and then John Oliver decided anyone who watches his show already knows the atrocities of this week and did a surprisingly light show.
Collapse