Google Drive has spent the entire evening making me uninstall Backup & Sync in favor of the new Google Drive, which does not sync the same way or with the same folders as before, and it has made both my desktop and laptop work at a crawl, so I am behind on everything and shall keep this brief. It was a quiet day though that is not a complaint: the weather was gorgeous, my arm and armpit are a little sore, the Chauvin verdict was a monumental relief though the whole situation is also unspeakably sad.

We took a late walk after watching the verdict and some of the initial reaction, had enchiladas for dinner, and watched Supergirl and an episode of The Irregulars in between baseball innings. Here are some photos from around Baltimore on the way to and from the zoo, including a St. Vincent de Paul Church (of which I am fond because I taught at DePaul in Chicago), a George Washington statue with public commentary, and some crab apples and gulls around the reservoir in Druid Hill Park: 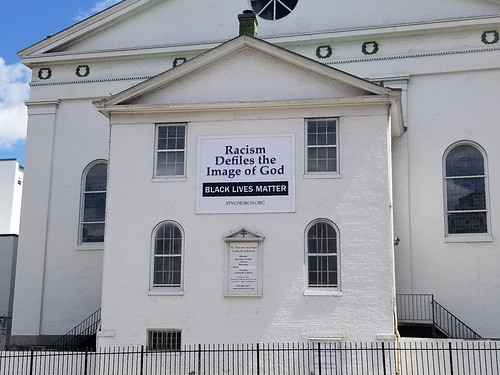