My friend and neighbor Carole, who has spent a lot of time in Seattle, asked whether we had ever gone to the Crystal Mountain Resort, which has a gondola ride to the summit with fantastic views of Mount Rainier, Mount St. Helens, and the Cascades from its restaurant and which is between tourist seasons since not much snow is left for skiing but the summer tourists haven't arrived yet. So we drove about an hour and a half out of the city, past clear snow-melt streams and waterfalls, into the Snoqualmie Forest and then to the resort, where we ate lunch looking out at the snow-covered mountains and rode the gondola over the late season's skiiers and snowboarders.

On the way back to Adam's house, we stopped at Skookum Falls, then drove into Redmond Town Center to get milkshakes at Lunchbox Lab (Nutella for me, chocolate peanut butter and Oreo for others, all superb) and drank them by the outdoor fountains. We still had leftover Greek and Indian food in Adam's refrigerator, so we ate that for dinner, then played some more rounds of Sushi Go before Adam and Katherine had to get ready for work on Tuesday. So we said goodbye to them and their dog and came back into Seattle with Daniel, with whom we watched some cooking shows while sorting photos and organizing things to fly back on Tuesday. A few photos, more soon! 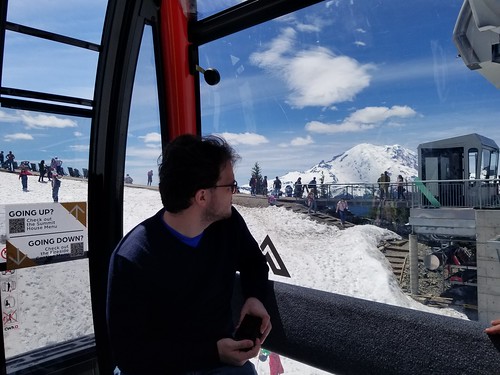