Sunday was even hotter than Saturday, though low enough humidity that it was tolerable in the shade. It was also a Pokemon Go Community Day and Gible was the featured Pokemon, so I spent lots of time catching and evolving them, which involved a trip to Cabin John Park to walk and a drive around Povich Field and the ice rink. Plus we chatted on Google Meet with our kids, though they had not much to report since we just saw them a few days ago. We had dinner with my parents, who brought in Chinese food while we brought the strawberries we picked Saturday -- Paul made strawberry shortcake. Here (through our unwashed windshield) are the deer we saw driving home from dinner: 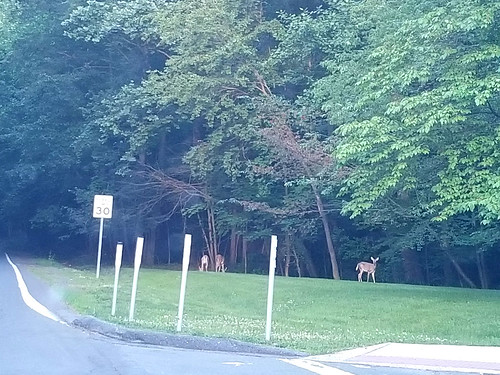 Then we came home to watch the Kennedy Center Honors, which was fantastic this year, partly because I love everyone who was being honored and partly because it was so much more dynamic with the performers moving around the building, without the producers trying to show off politicians and famous people in the audience. Favorite moments: Joan Baez covered by Rhiannon Giddens and Mary Chapin Carpenter, Debbie Allen clapping along to "Fame" and performances by her students, Garth Brooks crying through Kelly Clarkson singing "The Dance" and James Taylor singing "The River" (a Voyager vidding song for me), and every second of the Dick Van Dyke tribute starting with Julie Andrews.
Collapse