Monday was beastly hot, summer hot, humid hot. I'm not even sure where the morning went -- I mean, shower and laundry, sorting stuff to donate, plus looking all over the place for a butterfly necklace I remembered that I had and now I'm thinking I must have given away because it is absolutely nowhere. Then I was on the phone a lot of the afternoon, which was great, first with my college roommate and then with my friend who's my niece's other aunt, both of whom I hadn't spoken to in too many weeks.

We took a walk at dinnertime in the hope it would have cooled off, though not much. Then we caught up on The Flash, which has been so unwatchable so far this season that I can't even remember the speed force nonsense that got us here, then Legends of Tomorrow, which started out mildly amusing but then threw in the cartoon Disney musical number! I know some people don't want to see any more cicadas, so I'll lead off with a jeweled one I got as a gift, plus have a white-eyed one and a bug romance: 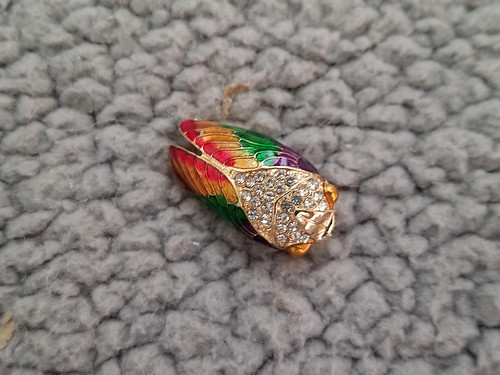