I don't have a lot to say and am behind on everything, so if I owe you an email or comment, sorry, will get back to it when I can concentrate on anything. It was hot here, though not nearly as bad as where my kids are, and apparently it's worse in parts of Oregon and British Columbia. Besides dyeing my roots, I can't even remember what I did till evening, when we went for a walk before Taco Tuesday and I watched Voyager's "Innocence" with my regulars.

Afterward we watched a bunch of Netflix's Penguin Town, which is scripted more like a reality TV show than a nature documentary -- no onscreen deaths or babies getting mauled by predators, humans trying their best to do the right thing at all times -- not the show to watch if you want to learn about the reality of life for penguins in populated South Africa, but a total delight if you want a narrative about penguins and humans having a lot in common.

I only just uploaded my photos from the canal at Carderock on Sunday before everything went to shit -- we could hear the frogs but they were hiding from the camera. So here are a teeny toad with a pic for size reference, a couple of turtles, a duckling, a dragonfly, and wild raspberries: 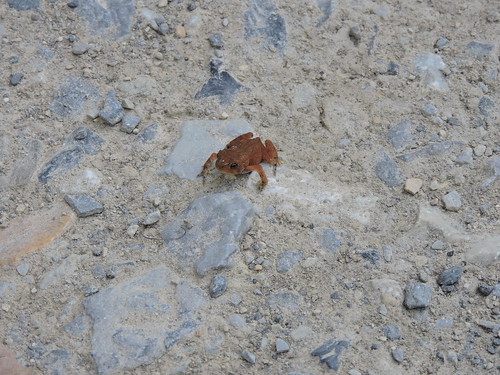