I'm supposed to be in New York right now, after dinner with my sister Nicole, for my college roommate Tracey's father's 85th birthday party on the Fourth of July. But we were not feeling up to the drive, or being cheerful all weekend for celebrations, or particularly leaving our cats who are still out of sorts looking around for Daisy with someone only visiting once a day to feed them. So we are still at home, after taking a walk along the canal in the afternoon.

We had pasta for dinner, then we watched two movies we'd managed never to see before: War Horse, because I wanted to see Hiddleston and Cumberbatch together in something that wasn't a Marvel movie and I figured no cinematic animal trauma could be worse than my week, and Passengers, which I'd been warned was so Pratt-terrible that I figured it would make The Tomorrow War look good but it was merely Problematic. My neighbor Carole's hydrangeas: 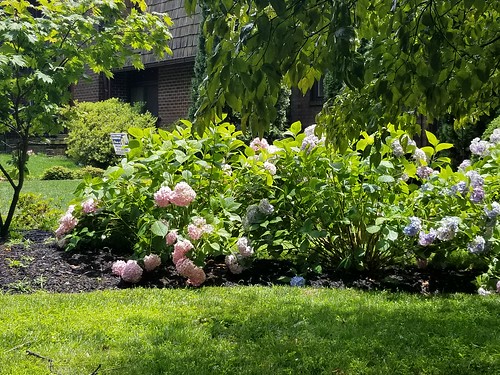