We expected to be out of town for the Fourth of July so our plans were haphazard. We wanted to be home in the evening in case anyone was setting off fireworks locally because Katniss and Effie are terrified of the sound, so we decided to go to the National Museum of the Marine Corps near Quantico and we asked Cheryl if she wanted to meet us, since none of us had visited before. We had thought it would only take an hour or so to go through, but we greatly underestimated how extensive the museum is -- lots of interactive exhibits even with coronavirus shutdowns, many short films, dozens of vehicles and planes in displays and suspended from the ceiling, a walk-through troop carrier, a deeply air conditioned room designed to depict the Battle of Chosin Reservoir. We were there till the museum closed and didn't even have time to see the sculpture garden and chapel. 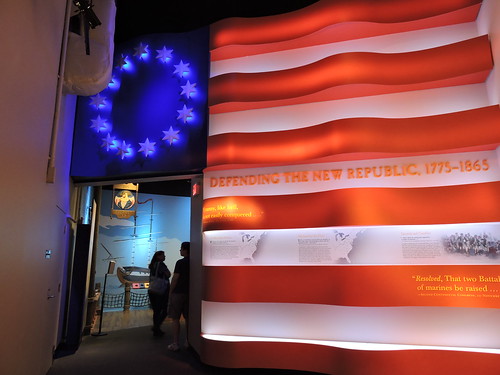 We had eaten sandwiches before going to the museum in nearby Locust Shade Park nearby, and thought we might visit the Stafford Civil War Park afterward. But it was nearly dinnertime, so we drove instead to Stafford's Carlos O'Kelly's, the Tex-Mex-Irish restaurant we haven't visited in several years since the one in Fredericksburg closed (it was our standard place to eat after the Virginia Renfaire, but for obvious reasons that didn't happen last spring or this spring anyway). After enchiladas, we drove home and watched A Capitol Fourth, which our younger cats did not appreciate because even fireworks on TV bothers them, but they did not hide in a panic in the basement bathroom the way they do during thunderstorms. Then we watched some of The Bureau of Magical Things, which is pretty mindlessly distracting; if the show has a dark side, we haven't seen it yet, and it has lots of girl power.
Collapse