I had an unexpectedly nice Monday -- we had brunch for the first time in at least a year and a half with Alice, Jeremy, and Avery, whom I saw all the time when Maddy lived here and have really missed this past year. We met at Ruthie's All Day, which was serving their excellent brunch menu -- I had a black bean burger benedict, and stole a bite of the apple pie pancakes from Avery, which were fantastic -- then we took their dog Percy to walk at nearby Potomac Overlook Park, where there was a deer five feet from our parking spot and wild raspberries growing everywhere. The nature center was closed, but the raptor enclosure was open, so we got to see the hawk and owls. 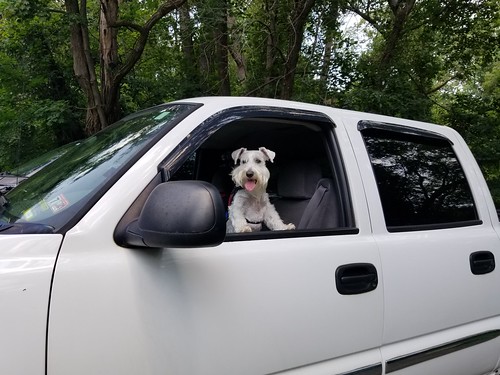 It was very hot despite the park trails being under shady trees, so when we got home, we spent some of the afternoon doing chores in the air conditioning. Later we took a walk around the neighborhood to see the summer flowers, had soup and sandwiches for dinner because we weren't ravenous after such a big brunch, and watched The Republic of Sarah, which remains rather oversimplified, didactic, and delightfully utopian, so just what I'm in the mood for these days. Then we caught up on last week's Kung Fu, about which I could say pretty much the same -- the CW is good about having idealistic young women fight for causes with the best of intentions.
Collapse