Wednesday was nearly as hot as Tuesday and very muggy -- we had lightning alerts and plenty of afternoon thunder but no rain. I chatted with my high school friends around lunchtime and visited with a neighbor in the afternoon -- she often pet sits for us when we travel and she brought presents and treats for Cinnamon, Katniss and Effie. We had leftovers for dinner and watched the rest of The Bureau of Magical Things, which I enjoyed; all about girl power, even the villain, and all very pretty and fairly light.

And we watched the penultimate episode of Loki with great glee. No spoilers, but I suspect Sylvie is going to end up being the villain of the season, not Ravonna; whether Sylvie has something precious hidden at the end of time and needed help getting back (a child, Kang, another Loki) or whether she's behind everything at the TVA and being the One True Loki has been her goal, I think she is going to do what Loki keeps being accused of and betraying everyone who ever loved her, including Loki.

I'm okay with it if Sylvie ends up being the villain, since it's very clear that Infinity War Loki could have survived Thanos just like Classic Loki and that Loki will always get lonely for Thor. Also, Throg and Alligator Loki should get their own show -- I'm sure Rocket and Groot would get along with them. (And if the rumors are true that Hugh Jackman's Wolverine will show up in the Multiverse, the TVA can't come down fast enough.) Here are some of the turtles we saw in the C&O Canal last week: 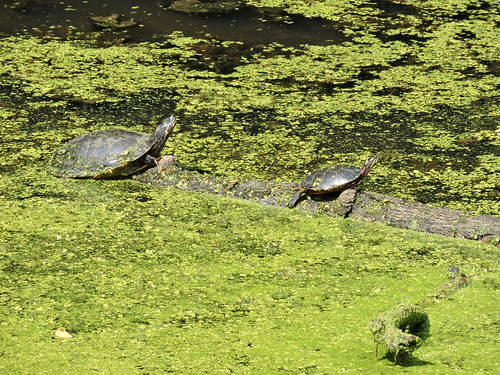