I woke up Sunday morning to a message from Adam that his flight to Seattle from Norfolk, from which he and Katherine were flying after spending a week in the Outer Banks with her family, had been diverted from Newark to Dulles, where he had a layover for a couple of hours. So after lunch, we picked up my parents and went to the airport, where we met Adam, Katherine, and Pepper, whom we walked briefly, then sat in the only open cafe in the airport outside security and munched some things while we heard about their trip. 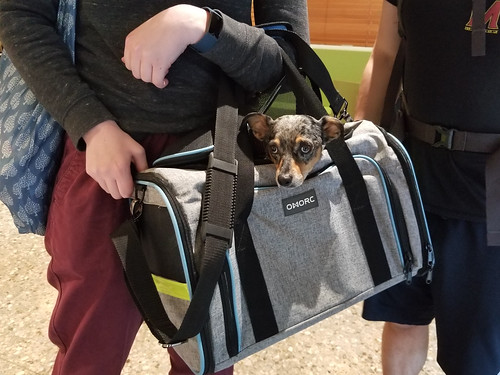 When eventually they had to go, we came home to feed the cats, then my parents took us to Brooklyn's Deli for dinner after we discovered that the King Street Oyster Bar was packed with people watching the Italy-England soccer match, causing both an hour-long wait and lots of screaming for the penalty kicks. When we got back, we watched Legends of Tomorrow (funny) and the first episode of Wellington Paranormal (hilarious, especially the X-Files comments). And Adam just messaged that they have landed safely in Seattle.
Collapse