I had a nice Monday, mostly because I had dinner plans with Angela and Carrie, who, though local, I hadn't seen in a year and a half. We met at the Silver Diner, so I also went to World Market before arriving for dinner, in large part because my mask strap broke and the masks are half price there at this late date in the pandemic. So that was a lot of adventure by the standards of this past year, and I got to have eggs benedict with Beyond Sausage plus 1/3 of an ice cream sundae and catch up with both of them!

My day was otherwise uneventful, catching up on some chores from the weekend since I unexpectedly spent most of Sunday with family. We watched the new episode of The Republic of Sarah after I got home, then the first episode of Titans, which is now on TNT; it looks like yet another extremely dark DC show, so we'll see if it holds my interest or if like Doom Patrol it starts to depress me. I had a request for more of Adam's dog, so here are some photos by him, some by me, and some by Katherine: 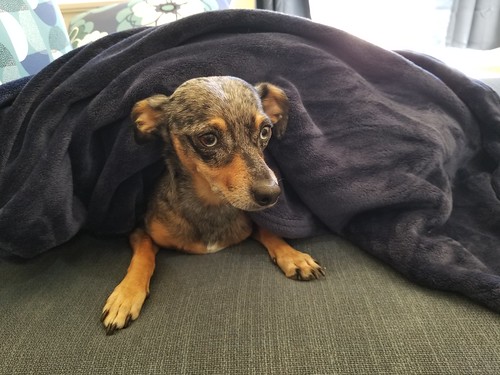