My Tuesday was pretty quiet -- I had a bunch of things I had to get done, I had lunch with my husband, I chased squirrels off bird feeders, I tried to convince the cats to eat their own food and not someone else's. We needed to go to the food store, so in the late afternoon of this 90+ degree day, we took a walk on the shady side of Cabin John Park before heading to Giant. Then I took a shower before dinner, which was leftovers.

My Voyager group watched "Tuvix" though we had to do it on Zoom because Google Meet is now limiting groups to one hour, and while one of us had a paid Zoom account, no one had a paid Google account. Afterward we watched some of the All-Star Game, then the delightful season premiere of Miracle Workers. The hollow tree and other sights along the Underground Railroad Experience Trail near Woodlawn Manor: 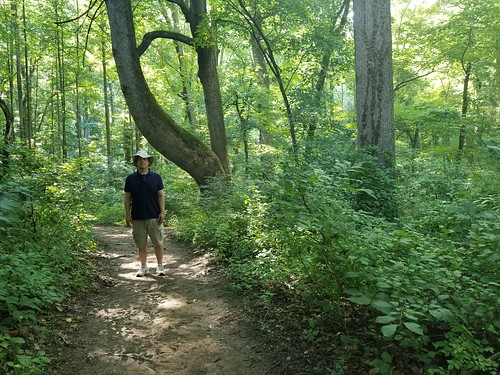