Sunday was a beautiful day, 80ish and mostly overcast, and we were lucky enough to have baseball tickets -- a belated Father's Day present for my father -- for the Nationals-Padres game. Because there was a shooting in front of the stadium on Saturday night that got that game postponed, we got to watch the last few innings of the Saturday game before this afternoon's game started, while we ate (veggie hot dog and fries for me, and eventually ice cream), and it started pretty well, with Scherzer pitching and the Nats going up 4-0.

It was also the second day of Pokemon Go Fest, for which players got 20 raid passes, which I thought was going to be a bust for me because I was going to be at the ballpark for pretty much the whole event, but I was sitting close enough to two gyms to raid at them and friends from all over invited me to remote raids, so I actually caught lots of legendaries and shinies. We left when it looked like the Nats had blown it, but (probably because we had gone) they got a walk off hit in the bottom of the 9th.

We had pizza with my parents and came home for Wellington Paranormal, which continues to be hilarious, and the season two premiere of Dead Pixels, which is kind of uneven but still funny. 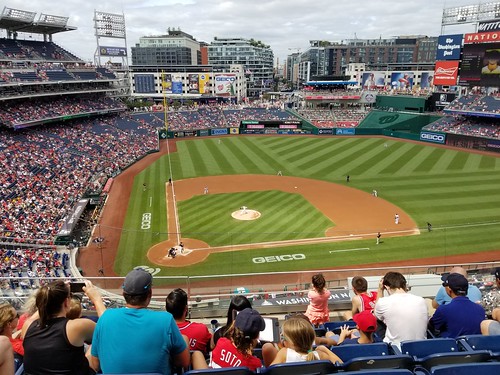