I'm behind on things because little went according to schedule on Wednesday -- not the laundry, not my Target delivery which as has happened before arrived with half the things in the huge box crushed by others, not my usual lunchtime call with my high school friends because one person couldn't come and the other two were tied up long after noon, not my walk which was interrupted by a thunderstorm. Food, at least, was good: Paul made Belgian food for dinner since it's Belgium's national holiday, and our neighbor brought us Moroccan bread that we ate with Moroccan honey.

And I discovered that the making-of-Loki episode of Assembled had arrived on Disney+, which we watched long distance with Cheryl, and that was a thing of total beauty. Tom Hiddleston narrates it as if he's actually a Loki -- at one point during a rehearsal he calls Frigga his mum -- and there's behind-the-scenes footage of Alligator Loki, and Owen Wilson discussing how, after quoting Shakespeare, Tom was polite enough to ask whether he too had ever played Hamlet, something Ben Stiller never thought to ask him. Here are the stone barn-museum and horses at Woodlawn Manor Park: 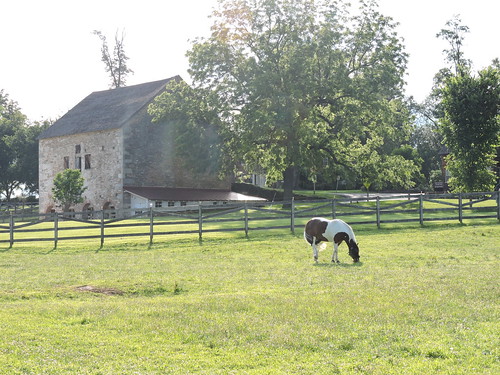