My Monday was, well, a Monday -- some stuff got written, some laundry got done, the birds got fed and then a squirrel went swinging on the feeder, scattering seed everywhere, so we had a little mouse alongside the sparrows, cardinals, chickadees, and occasional chipmunks on the deck. It was quite hot early on and pretty sticky when we took a walk, then some storms blew through and it cooled off a bit.

We watched mostly surfing in the Olympics coverage -- I never get tired of looking at beaches and waves -- and saw this weeks Republic of Sarah (consistently interesting) before PBS's screening on POV of Mayor, the funny-sad, fascinating documentary about the mayor of Ramallah during Christmas week and Prince William's visit. From the C&O Canal on Sunday, the muskrat munching in the lock: 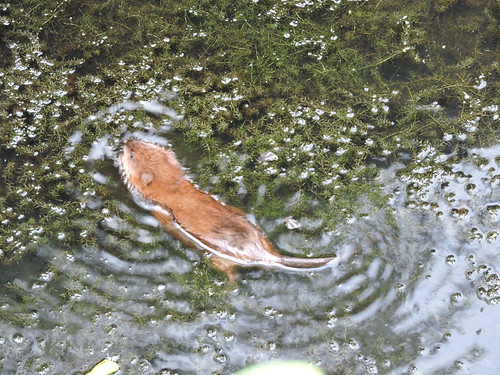