Friday was a not-too-hot though very humid day -- the wood on the deck never got dry, and it felt sticky out walking, where the bunnies have re-emerged after all the rain but so have giant fungi and little slugs. I had a bunch of stuff to get done in the afternoon, with a lot of cat help, then we had dinner with my parents and came home for this week's Burden of Truth. Here are some of the mushrooms and molluscs we saw around the neighborhood (goddess for scale): 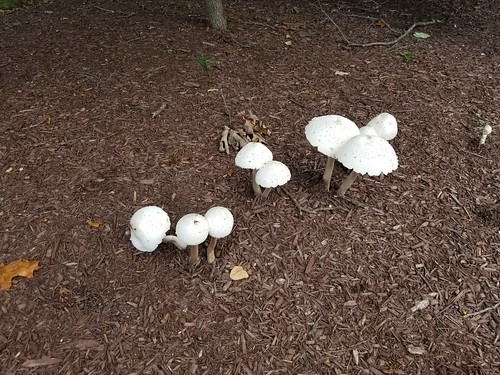 Our Friday night movie was Reminiscence, which stylistically is straight-up techno-noir and felt like a mashup of a lot of better movies I love (Minority Report, Eternal Sunshine of the Spotless Mind, Inception, Dark City) with inevitable Jackman-Ferguson Greatest Showman vibes and lots of Westworld parallels in visual structure and Newton-Sarafyan casting. The cast really elevated the material -- even the minor players were good -- but I wish more of it felt original.
Collapse