Tuesday, like Monday, was hot and uneventful, apart from a couple of Pokemon raids, some neighborhood bunnies and woodpeckers, and my Tuesday night Voyager group, which was missing two people but had a very good friend join us this week, so that was lovely. Plus we watched "Flashback" -- the episode with Sulu and Rand set during the events of Star Trek VI: The Undiscovered Country -- and that was quite fun too.

We also watched the return of Supergirl, which was not enthralling, but knowing that this is the end of the final season makes me want to see it through, at least until Katie McGrath and Julie Gonzalo are on other shows. And that was about all the excitement. Here are some photos of the calves born at the county fair this year; the little brown one, Mr. Liberty, was born to Independence, who was also born at the county fair, in 2017! 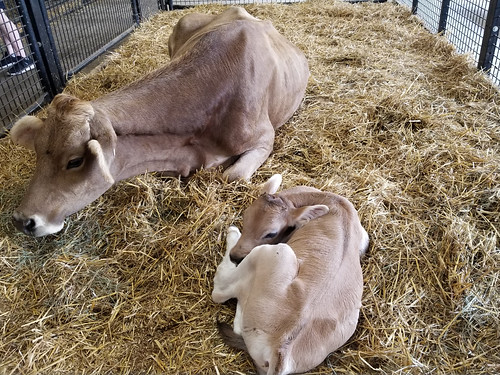