We went out to get bagels right after I got up on Tuesday so Goldberg's wouldn't run out of whole wheat everything bagels, plus we filled up on gas in case there's another mini-shortage from the hurricane pipeline shutdown, and that was the most excitement I had all day. Well, we did take a walk and the drizzle held off, but we only saw one bunny. Even my Voyager group was low-key and did not watch an episode because two people were busy with family they hadn't seen since before the pandemic, but it was still fun to hang out and chat.

I sort-of watched Supergirl, though we were trying to make flu shot appointments online at the same time and it was unnecessarily complicated (Walgreens' web site kept insisting that my insurance member number was too few digits though I was typing it right off the card) so I'm not sure I know what was going on either with the prisoner-aliens or with Dreamer. I was paying more attention to Miracle Workers because it's such fun to see poor Daniel Radcliffe suffer. Here are some photos of fun at the county fair midway, though I rode no rides this year! 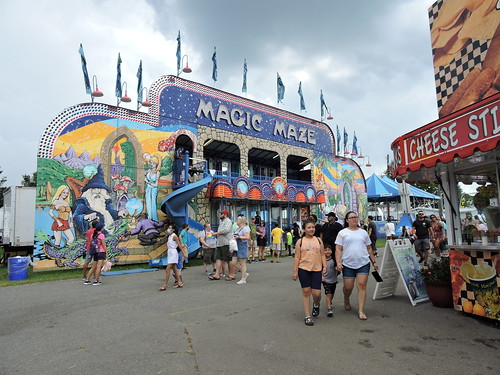