I had a quiet Yom Kippur during which I did no traditional atoning, at least not in Hebrew or in a group setting, though it seems like there's a lot of that going around this year. Instead I did some reading and chatted with some friends and tried to figure out what to do about a complicated situation with a neighbor who's a friend, who is ill and apparently resisting treatment (not with covid, she's vaccinated). We had dinner during a rainstorm with my parents to break the fast, though none of us had been fasting.

Then we came home and I half-watched the Giants-Washington football game while chatting with fannish friends, after which we took a break for What We Do In the Shadows (in Atlantic City, hahaha). New York was winning when we put the game back on, but seemed determined to lose, and penalty after penalty let Washington get back in the game and win with a second chance at a field goal after time had expired, so that was fun! Here are a goat and kid we met at Homestead Farm last weekend: 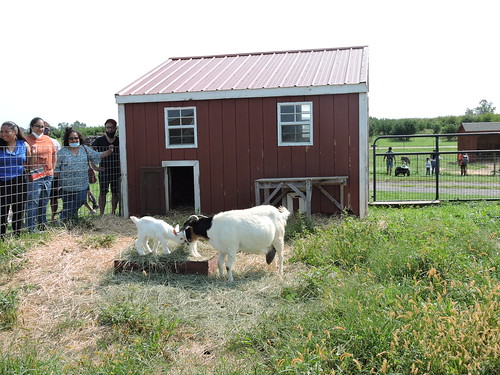