So I was wrong when I said things were not that bad -- I assumed when Roto-Rooter left the dehumidifier but not the giant heat machines yesterday that it was because they had concluded we didn't need them, and believed the first guy who said they wouldn't need to cut up our drywall. Someone else was supposed to come out today, originally between 4-6 p.m., after which we planned to have dinner with my parents, but when he changed the time to 7, we had my parents come to us for dinner instead, and he didn't actually arrive till 8:30, at which point he drilled holes in the drywall and set up a heater so loud it sounds like someone's vacuuming through a fire drill, all while advising us that if this task isn't done within 48 hours of a leak, mold will form and destroy the insides of the house (and it would have been within 48 hours if they'd been on time!).

Anyway, I am hiding in younger son's room, where we originally brought 20-year-old Cinnamon because her the couch she prefers is right next to the devices making all the noise and the bathroom with her litterbox requires her to run a gautlet of cables and machines, but she was restless and seemed confused even though we showed her we had brought water and the litterbox to the upstairs bathroom, so we took her back downstairs and the fact that she fell asleep leads us to believe that she's about as deaf as we suspected. The other cats are hiding elsewhere in the house. A lot of my activities today involved sorting books, so I was in the basement, and tomorrow I will do the same since it's the quietest part of the house -- it's not like I can hear myself think, let alone watch TV. Here are photos of some lovely nautical crafts from Annmarie Garden Artsfest: 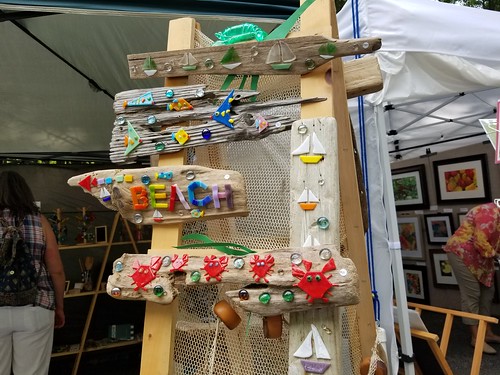