My brain is still clanging from hours of fire alarm vacuum cleaner screaming heater noise -- I took decibel readings with an app on my phone and it was over 90 on the couch, over 80 upstairs -- so I spent most of the day down the basement sorting and packing up books, which required asking myself difficult questions like "Am I ever going to reread all nine of these biographies of Amelia Earhart?" and "Do people in academia still read Toril Moi or are we now allowed to talk about feminist goals without having to use the words 'epistemological' and 'reification'?" (All of the books by Lacan, Derrida, Adorno, et al have already been donated because hell no I am not opening those ever again.)

We took a walk in the late afternoon, ate leftover Indian food from Bombay Bistro for dinner, and turned off the dehumidifier and heater at 7 p.m. because our neighbors told us they kept them up the night before (through a brick wall) and they have two children under six who need to sleep. So I was able to watch Voyager's pretty terrible Ferengi episode "False Profits" with my Tuesday night group, which was nice and relaxing though my ears were still ringing. Then we watched the BLM episode of Supergirl and the dead cat episode of Sex Education, which was so gratuitously vile that I nearly stopped watching the entire show. Here is some of the art in the woods at Annmarie Gardens: 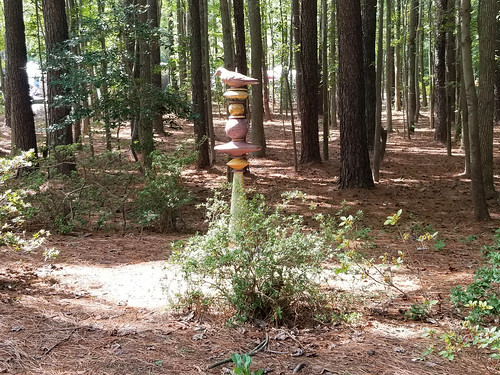