Tuesday was as cool as Monday, overcast and dark, which made me sleepy while I was doing laundry and cleaning up things I ignored over the long weekend. Nothing much exciting went on until afternoon, when we watched some baseball (*cries* White Sox), took a walk, looked at neighborhood Halloween decorations, and watched some more baseball (*cries* Brewers, or more precisely *cries* stuck with the Braves).

We ate leftover Chinese food courtesy my parents for dinner, then I watched Voyager's "Sacred Ground" with my Tuesday night fan group, which is still an enjoyable if flawed episode (hokey but a nice change from know-it-all Starfleet and a good Kate performance). Now the Dodgers have beaten the Giants, so at least one game went as I wanted it to! Some of the yarn from Dancing Leaf, Heron's Meadow, and Breezy Hill farms: 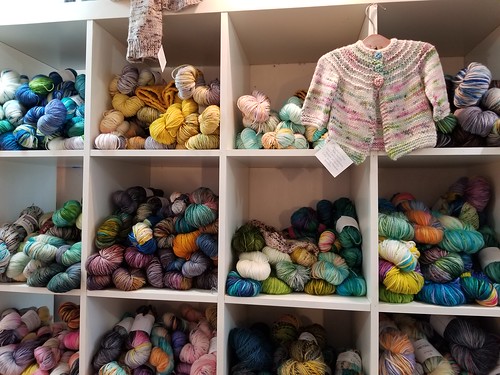