I went to the lab early Wednesday to have blood drawn for routine tests, which always leaves me groggy for the rest of the day, though it wasn't so early to make me exhausted and it wasn't so late that I was headachy with hunger. When I got back, I watched Shatner go into space, which was thrilling and surprisingly moving, then I had some almond butter toast and talked to my high school friends, though Windows kept getting updates that slowed my computer.

While I was chatting, I was playing with the necklace I put on to go out and broke the elastic, spilling beads everywhere, so I spent a stupid amount of the afternoon putting it back together on stronger wire with some little modifications. We took a walk, admired some more Halloween decorations while walking around the neighborhood, and ate Trader Joe's Vegan Meatless Meat Eater's Pizza for dinner, which we'd never had before and it was very good, even the fake cheese.

Then we watched The Masked Singer, which unmasked yet another black woman who's a legend while keeping boy band clones, always frustrating, and after that, I made Paul watch Pokemon the Movie: Secrets of the Jungle, which was pretty entertaining for its short run time, half-Tarzan and half-Avatar, quite pretty. From the grounds of the Pennsylvania Renaissance Faire, some of the autumn decorations at Mount Hope Winery: 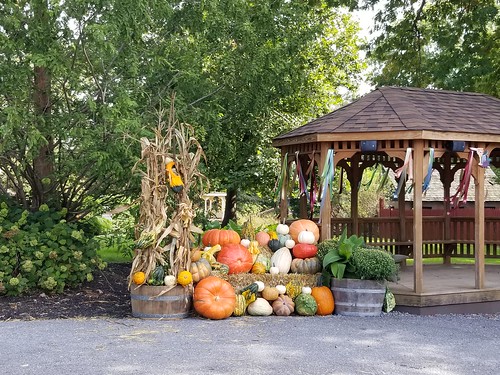