Quickie, I am behind on everything post-Halloween! It was not an eventful day, just a lot to get done -- laundry, sweeping, filling the bird feeders, bringing in and putting away Halloween stuff, sorting and uploading photos, plus some writing that had to be finished and various other chores. It was a beautiful, chilly afternoon, perfect for a walk, and there are two new Pokemon gyms in walking distance of my house and now I've raided at both of them.

Paul made cornbread and Mexican stew for Dia de los Muertos, we watched Antiques Roadshow which I'd thought might be Day of the Dead items but was instead art and furniture based on the human form, then we watched the surprisingly exciting Chiefs-Giants game -- surprising because as with so many sports these weeks, I'd be fine if both teams lost! (I rooted for the Giants.) Here's today's dinner, decorations, plus a couple of pics from Halloween: 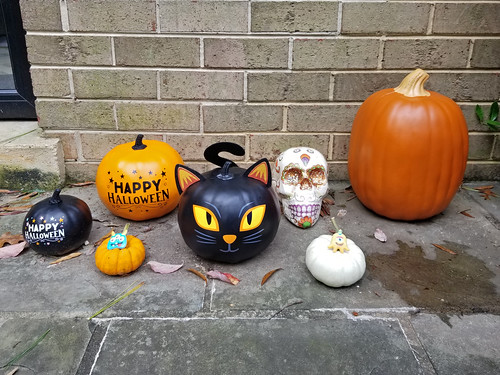