It rained nearly all of Tuesday and was the first really chilly day of the fall, so I spent nearly all of it indoors. I still have lots of chores to catch up on and we picked up more boxes when we dropped off the last load of books at the library sale, so I packed a box of academic and history books and started sorting what's left of the sci-fi, which is largely magazine-based media books like Starlog's tie-ins. I think I may try to sell my complete sets of Hornblower and Jim Thompson novels on eBay.

After dinner, I watched Voyager's wonderful "Future's End, Part One" with my friends, then this week's Succession (currently Team Shiv but that could change) because we could already see that the World Series score was atrocious. That didn't improve, but I don't care about the Braves winning now that I know Youngkin won the Virginia governor's race, which is infinitely worse. We may be getting the fall's first frost tonight, so here is some of the color last weekend at Brookside Gardens: 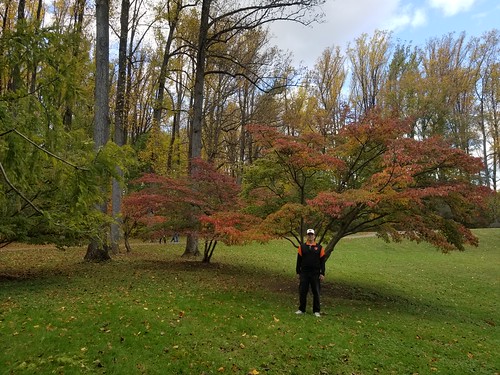