Thursday was another cool fall day, beautiful outside, lazy cats inside. I had someone coming to pick up books I sold on Facebook Marketplace around lunchtime, so I packed those up, and while I was down the basement, I got out the last box of KMAS material, the financial papers we had filed with our own in-case-of-audit stuff. I knew the incorporation papers, charity documents, and club fundraisers were in there, but I'd forgotten I had letters from everyone from Kate to Jeri Taylor to Tim Russ's sister, so now all of those have been scanned, and the public correspondence can be sent on to Texas A&M with the club magazine collection.

It was a glorious day for a walk, and since it was Diwali, we had Indian food for dinner and lit candles. Then we put on the Colts-Jets game, which unfortunately did not go well for the Jets from early on, though we had the sound off for an hour so I could talk to my Thursday night fangirl chat group on Zoom. It finally ended and now I'm watching Deep Space Nine's "Homefront" and "Paradise Lost" which are still excellent and even more relevant now than when I first saw them. Here are some photos of the autumn color at Great Falls last weekend around the Charles F. Mercer packet boat: 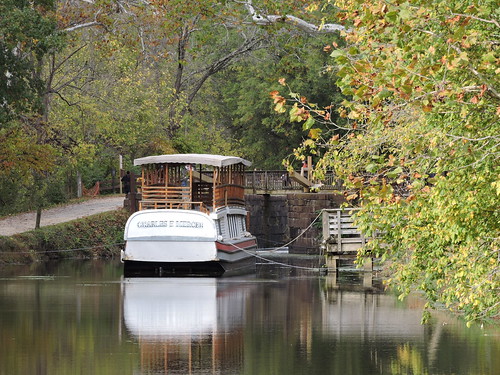