A lot of my Wednesday involved getting rid of stuff we've had stashed in the basement, though it was another gorgeous day so I also tried to spend plenty of it outside. I had several history textbooks, sent for evaluation when I was on the University of Maryland's textbook review committee, that I gave to a music teacher, and several enormous stacks of magazines that I gave to a former MCPS teacher who now does art therapy with students with autism. I still have some anglophile magazines, some cooking magazines, some sports magazines, and some random entertainment magazines to move, but I need to go through those and figure out which ones I or someone I know had written articles for so I can scan them.

I talked to my high school friends at lunchtime, and we took a walk in the afternoon in the unseasonably warm weather. The Masked Singer is now on at the same time as Legends of Tomorrow, which is annoying -- I am more often spoiled for the former, so that's the one I watch when it airs. After the two singers were unmasked, we put on more Ted Lasso (I see why everyone hated the first episode of the second season). I keep meaning to post these photos from when we went to MoPop in Seattle for the Disney exhibit: here are guitars belonging to Brandi Carlile, Nancy Wilson (with me), Dave Grohl and Magic Sam, Woody Guthrie, Hank Williams and Stevie Ray Vaughan, and Greg Ginn's lucite guitar, plus the guitar tower: 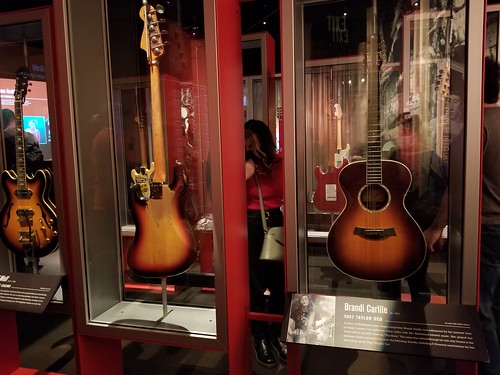