It was raining when I woke up, but by lunchtime the sun was out, so we did a bunch of chores in the morning -- we are determined to have the house, if not clean, then at least presentable by the time the kids arrive for Thanksgiving -- then we ate lunch and went to walk at Carderock. The tallest oaks are more white than yellow by now, but there are still a lot of red and golden leaves, and we saw a wide variety of waterfowl, including grebes and wigeons as well as mallards and geese. 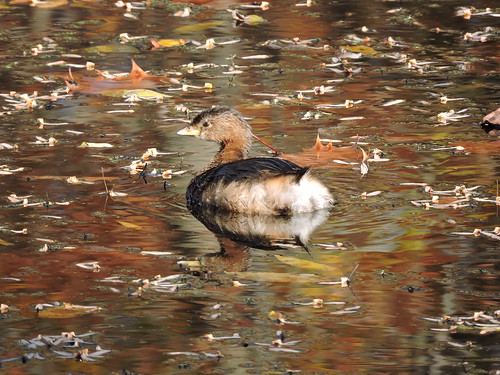 The guy I gave most of my Star Trek books to a couple of years ago stopped by after dinner to pick up one more batch, including Starlog magazines going back to the 1980s (the first one I ever bought had the headline "Han Solo Will Return!" after The Empire Strikes Back had opened) and some oversized books I forgot were in the basement when I gave him the ones in the bedroom. I also gave him my last two big Playmates toy sets, which were covered up and deserve to be enjoyed.

We watched Red Notice, which was as silly as the reviews said but very enjoyable so I don't understand why the reviewers were so down on it. I found it about as predictable as Shang-Chi, which got mostly great reviews, and the cast has great chemistry -- I mean, yeah, Ryan Reynolds always plays the same character, he did that as a Pokemon too, and The Rock basically stuck to what he does best, but they were all charming together and knew to mock the movies they were stealing from.
Collapse