We got up on Sunday and drove to Hanover to visit Paul's parents, passing farms en route to La Cucina, an Italian restaurant they like from which we picked up lunch. We ate pasta, had cake for Cinda's birthday, took a walk around the neighborhood during which we met a neighbor's miniature schnauzer, assisted with holiday decorations, and discussed plans to see them about home help over the next couple of weeks. On the way home, we stopped at Catoctin Mountain Orchard, where we bought cider, cheese, crumb cake, and soap -- they were giving away the last of their pumpkins. 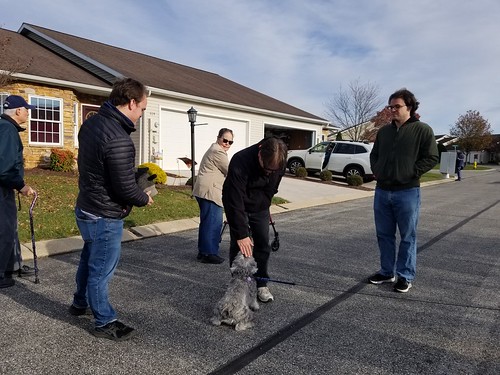 We saw the unhappy end of the Auburn-Alabama game while Paul made crepes for dinner -- Maryland actually had a great day versus Rutgers that made the Terps bowl eligible, probably because we didn't see a single minute of the game -- and after eating, we played some more Azul. Then we watched Shang-Chi and the Legend of the Ten Rings again because Adam hadn't seen it, and the rest of us all liked it, though all the ways in which it sticks to Marvel formula are even more obvious on a second viewing. The women and the animals based on the same myths as Pokemon are my favorite aspects!
Collapse